In other words, the term “antipsychotic” is somewhat inaccurate, although all of the medications in this category to also have antipsychotic effects.

Typical versus atypical really refers to whether the medication has effects other than blocking dopamine 2 receptors (which is generally thought to be the reason most of these medications are antipsychotic) which reduce the severity of extrapyramidal side effects (EPS symptoms of muscle stiffness, muscle spasms, etcetera).

An atypical antipsychotic is one that has other effects (most commonly a tendency to block serotonin 2 receptors) in addition to the dopamine blocking effects which reduce the tendency to cause EPS.

A very nice summary of all of the studies on efficacy and side effects of the antipsychotics was published in the Lancet in 2019 (Huhn). Mostly,there were few efficacy differences, the differences among medications mostly had to do with side effects. Consistent with other studies, clozapine was the clearly the most efficacious. Amisulpride (not available in the US) was second, then thiothixene (a medium potency older antipsychotic), zotepine (also not available in the US), olanzapine and risperidone. The greatest difference was between clozapine and all other medications. Similarly, in a meta-analysis of longer-term antipsychotic effectiveness, clozapine, olanzapine, and risperidone demonstrated the largest treatment effect sizes (Kishimoto).

Because of the confusion embedded in the distinction between typical and atypical agents, in this article I propose to classify the medications based on similarities in pharmacology. The wikipedia article on antipsychotics classifies medications by structure (butyrophenones, diphenybutylpiperidines, phenothiazines, thioxanthines, others, etcetera) but this is not as useful clinically.

This page uses the traditional scheme for classifying psychotropic medications. For information about the Neuroscience Based Nomenclature, an alternative system that is supported by a number of prestigious organizations click here.

High potency dopamine 2 antipsychotics are most useful when the goal is control of symptoms of psychosis without the risk of anti-cholinergic, or anti-histaminergic side effects. They are the mainstay of treatment of psychosis in the acute hospital setting (a medically ill patient who has psychotic symptoms). In these settings they are often combined with another agent to reduce the incidence of extrapyramidal side effects. They are almost all available as both oral (pill form) medications and as injectable medications.

They tend to have fewer cardiac adverse effects (prolongation of the QTc interval and consequent arrhythmias), which is also important in an acute care setting.

Some examples of this category are – 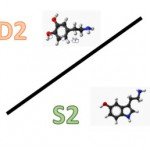 This group of medications is “atypical” in the sense that these medicines do not usually have the same amount of EPS side effects, at comparable doses, as the high potency dopamine 2 antipsychotics, however it does not have the anticholinergic, antihistaminergic and other effects of other antipsychotics.

Perhaps because these medications lack those other effects, they tend to be somewhat less “atypical” and tend to have somewhat more EPS compared with other atypical agents.

As with the high potency dopamine 2 antipsychotics, they are generally safe in an acute psychiatric or medical setting, or in patients with other risk factors for adverse effects other than EPS – patients who are older, or have other medical conditions that might lead to a greater risk of confusion or delirium if given an agent with anticholinergic effects.

This is a group of medications that combines dopamine 2 blockade with mild anticholinergic effects which somewhat reduce the likelihood of EPS.

Molindone is somewhat controversial. Some people feel that it may be better thought of as an “atypical” antipsychotic as the risk of EPS in those taking molindone seems less than one would expect given its dopamine 2 effects.

As a group, these medications are relatively rarely prescribed now.

This is a heterogenous group of antipsychotics that have broad effects on multiple receptors, including dopamine 2 (of course) and often including serotonin 2 receptors. The list below includes both “typical” and “atypical” antipsychotics.

What tends to unite this group of antipsychotics is that many of them have evidence for greater effectiveness in at least some patients with psychosis, and, perhaps, other conditions as well.

The prototype of this broader effectiveness, is clozapine, which remains the single antipsychotic with the strongest data supporting effectiveness. It is also a medication that is underused in many settings where people with serious mental illness are treated. This is because of its adverse effects which are almost enough to offset the greater effectiveness of the medicine, and limit it to use in people who fail to respond to other antipsychotics, including some relatively unique adverse effects (most dramatically, suppression of white blood cell formation).

Medications in this category tend to be more sedating (antihistamine effects) and to cause more dry mouth, blurred vision and to increase the risk of confusion, especially in the elderly (anticholinergic effects).

Several medications in this category have been discontinued because they have been associated with a greater incidence of severe adverse effects (including death) when used in an acute setting (notably thioridazine).

In addition to antihistamine and anticholinergic side effects, most of the medications in this group are associated with greater risk of cardiac toxicity, which may explain the association with sudden death in acute settings.

Because of their broad effects, these medications also have more potential negative drug interactions. For example, olanzapine carries a warning against combining the injectable form of the medicine with the use of benzodiazepines.

This is a place for listing medications that appear to have significant antidepressant effects when used alone in the treatment of bipolar depression. Why these medications have this effect is not known. There are many theories (for example, effects on serotonin 7 receptors, effects of metabolites on reuptake proteins, etcetera) but it is not possible to find a clear and consistent pharmacologic explanation as I write this.

The selection of these medications is largely based on data from large, well designed, clinical trials showing significant effect sizes (a clinically significant response, not just a statistically significant finding) on bipolar depression when used alone (not combined with an antidepressant).

Dopamine partial agonists are medications which are “atypical” not because they combine dopamine 2 and serotonin 2 effects, but because they have both antagonist (blocking) effects on dopamine receptors and agonist (stimulating) effects.

In an ideal world, this would allow a medication to fill in for areas of the brain with too little dopamine activity (for example, in the areas that are associated with pleasure and reward, the meso-limbic pathways) and block activity in those areas with too much, where dopamine activity causes psychosis. However, there is not a clear distinction between these two areas. At best, they overlap each other, at worst they may be the exact same set of neurons.

Nevertheless, these medications do appear to have some unique effects. At lower doses they may be more effective as “antidepressants” and at higher doses they may have more antimanic and antipsychotic effects.

As a group, they have fewer anticholinergic and antihistaminergic effects (dry mouth, sedation) and are associated with somewhat more of a tendency to cause nausea. 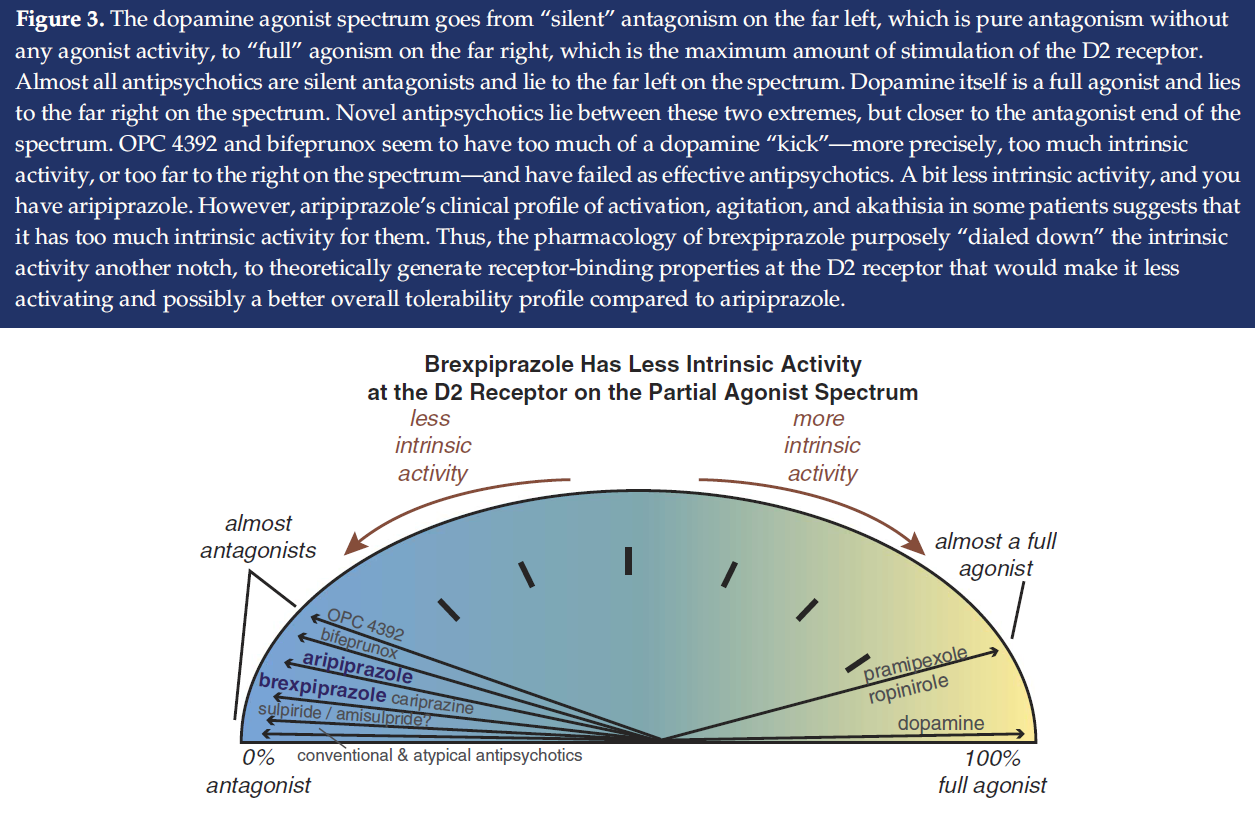 Since the effort to categorize these medications is a bit of a leap of the imagination, one could argue that all of the medications listed belong here, they are all unique.

My list of “other” agents is for atypical antipsychotics that don’t readily fall into any category.

This section is a place for storing information about how these medications affect neurotransmitters, disease states, and other outcomes.

A very useful way of comparing medications is looking at the number needed to treat (NNT) and number needed to harm (NNH) across medications. NNT and NNH are a way of measuring not just whether a finding is statistically significant but also whether the result is clinically meaningful. A statistically significant finding can be the result of a study that enrolled a very large sample of patients.

Imagine a study of a medication for high blood pressure that enrolled 2000 patients in the active medication group and another 2000 patients in a placebo group which found that this new medication had a statistically significant effect – it reduced blood pressure in the active group in a way that was very unlikely to be due to chance). This result may be enough to get the medication approved, but it might also be the case that the effect is clinically insignificant (in that study, for example, the finding of a consistent 2 mm Hg of reduction in blood pressure would be clinically insignificant – unlikely to confer any noticeable benefit).

In terms of propensity for weight gain, there are two considerations. The likelihood of any weight gain (bearing in mind the fact that, on average, Americans are gaining about one pound per year, and thus, even placebo is going to be associated with weight gain over time) and the likelihood of clinically significant weight gain (usually defined as more than 7% of pretreatment weight).

Unfortunately, these medications also have some unique benefits for some patients.

The good news is that, even with these medications, most patients do not have significant weight gain.  People who are going to gain a significant amount of weight typically report a sudden (within a day or two) fairly dramatic increase in carbohydrate craving (raiding the refrigerator at night for ice cream or other high carbohydrate foods). Thus, if there is a good reason to try one of these medications, it is reasonable to do so and closely monitor for weight gain. If there is no significant change in appetite or weight in the first two weeks of treatment the risks of significant weight gain over time are much reduced.

Most of the rest of the agents fall into a moderate risk category. I put aripiprazole in this category although the clinical studies (short term studies) found little evidence of weight gain. With this agent, and perhaps other partial agonists, the effect is a gradual increase that is not well demonstrated in short term studies but is nevertheless greater than the general weight gain associated with living in this country.

These medications seem to have consistently lower risk of weight gain. In some clinical trials there is net weight loss over time. This likely reflects the fact that many people in these trials are being switched from other agents.

The clear winner in this category is quetiapine which in many trials had lower rates of EPS than placebo. Results with other agents are more variable. Some studies find very low rates, other studies higher rates, in a way that is hard to make sense of, but generally clozapine, olanzapine and asenapine appear to be quite low.

Effectiveness of Atypical Antipsychotics – from Wikipedia 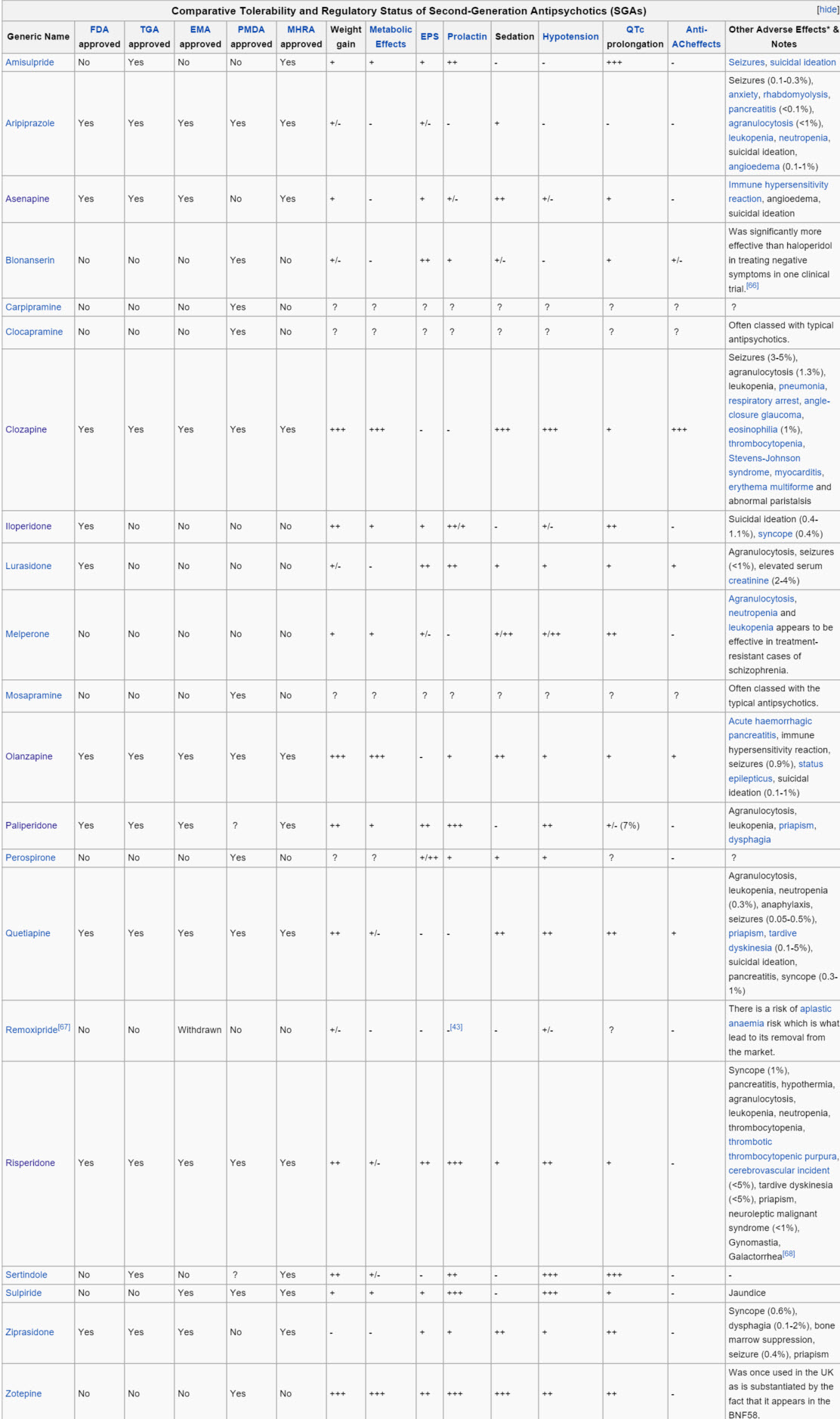