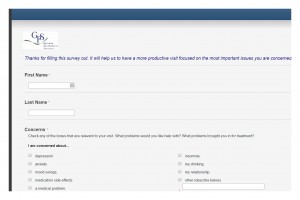 For more than a year we’ve been sending out reminders about future appointments along with a link to a pre-visit survey form. The idea for doing this originally came from new documentation requirements that were embedded in a revision of the standard billing codes for psychiatry a couple of years ago. We realize that the new documentation requirements would take up so much time that they might detract from the actual clinical experience.

As a result of how the surveys began, many of our long time patients, who don’t submit to insurance companies and therefore aren’t too worried about billing codes and reimbursement amounts, decided not to bother filling the form out.

In the intervening years we have modified the form a number of times as we’ve come to realize that having some pre-visit questionnaire can actually be extremely helpful. But the notion that this is really a form related to billing persists.

Last week there was a perfect example of how the form actually can play a key role in making treatment more effective. A man in his late 30’s, who we’ve been seeing for about a year for a bipolar depression, filled out the form before his visit.

Usually we read what people have written before the appointment but this morning was particularly hectic and it wasn’t until about halfway through the appointment that I got around to reviewing what he’d said.

The first half of the appointment had focused on his mood and anxiety and problems that he was having with his back. We talked about his relationship and how things were going in the family and his work. It was a pretty typical visit. It didn’t seem as if there was anything to significant for us to address in the session.

Then I glanced down at the survey results and I noticed that he had checked the box next to “chest pain”. Since he is a young man I figured this would turn out to be the kind of “chest wall pain” that many young people experience and which makes them worry, if they are prone to worrying, that they might be having heart problems.

But as I started to ask more questions it became clear that this didn’t seem like chest wall pain, and it didn’t seem like reflux pain, in fact it seemed more and more as though it might be something called “angina” which can be a symptom of heart problems and which needs to be addressed urgently.

In the course of our conversation he noted that he had had an abnormal EKG when he was admitted for minor surgery six months ago and he never bothered to follow up on the recommendation that he see a cardiologist.

Long story short, I was able to get him seen in the urgent care clinic next-door and he received treatment for what was diagnosed as “atypical angina”.

The purpose of the pre-visit questionnaire is to make sure that we don’t miss important information when we get together. I can’t ask all of the questions that might be relevant to an appointment. And if I did there’d be no time to talk about other important things.

If you are a patient in the clinic, the next time you see the link, fill it out. And be sure to spend a little time thinking about what it is that you want to talk about during the session and checking to make sure that you don’t need refills.