The U.S. Food and Drug Administration (FDA) has granted Breakthrough Therapy designation to rapastinel, which follows the medication receiving a 2014 Fast Track Designation from the FDA. Rapastinel, an investigational medication for adjunctive treatment of major depressive disorder, is an intravenous drug that is a novel NMDA receptor agonist. It is being developed by Allergan.

The Breakthrough Therapy designation is a new category for agents that treat serious medical conditions that have the potential to be a “substantial improvement” over existing medications. It is intended to fast-track development of these agents.

Ketamine is the NMDA receptor agonist that has made the topic of agents like rapastinel so exciting as potential treatments for a major depressive disorder. But ketamine comes with a number of side effects. 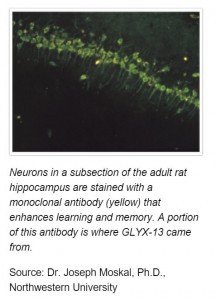 The origin of rapastinel (formerly known as GLYX-13) is illustrated in the picture to the right and in a press release from the NIMH, which funded some of the research on this compound, from two years ago.

“Ketamine lit the field back up,“ said Joseph Moskal, Ph.D., a molecular neurobiologist at Northwestern University and senior study author. “Our drug, GLYX-13, is very different. It does not block the receptor ion channel, which may account for why it doesn’t have the same side effects.”

Moskal’s journey with GLYX-13 came about from his earlier days as a Senior Staff Fellow in NIMH’s Intramural Research Program. While at NIMH, he created specific molecules, monoclonal antibodies, to use as new probes to understand pathways of learning and memory. Some of the antibodies he created were for NMDA receptors. When he moved to Northwestern University, Moskal converted the antibodies to small protein molecules. Comprised of only four amino acids, GLYX-13 is one of these molecules…

Protein studies indicated an increase in the hippocampus of the NMDA receptor NR2B and a receptor for the chemical messenger glutamate called AMPA. Electrophysiology studies in this brain region showed that GLYX-13 and ketamine promoted long-lasting signal transmission in neurons, known as long-term potentiation/synaptic plasticity. This phenomenon is essential in learning and memory. The researchers propose how GLYX-13 works: GLYX-13 triggers NR2B receptor activation that leads to intracellular calcium influx and the expression of AMPA, which then is responsible for increased communication between neurons.

The results from the recent Phase 2 clinical trial showed that a single administration of GLYX-13 produced statistically significant reductions in depression scores in patients who had failed treatment with current antidepressants. The reductions were present within 24 hours and lasted for an average of 7 days. The effect of a single dose of GLYX-13 was nearly twice as great as the effect seen in clinical trials of most conventional antidepressants after 4–6 weeks of treatment. The researchers reported that no psychotomimetic or hallucinogenic side effects were observed.

Allergan plans to start phase 3 studies of rapastinel in 2016.